You heard me right. Doritos Locos Taco - a taco with a Dorito chip as the shell available exclusively at Taco Hell - I mean, Bell - Taco Bell.

While I'm not a fan of Taco Bell, I enjoy a taco now and then. And Doritos. Please. I love them. But the thought of all of that artificial cheesey-ness on a taco makes me insides squirm. 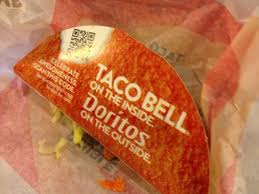 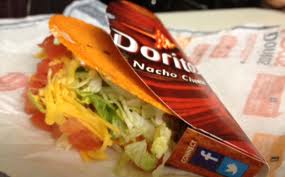 Why does this exist? I cannot, for the life of me, see how this would taste good. Then again, I cannot see how anything purchased at Taco Bell would taste good.
Posted by Nikki at 10:37 PM 2 comments:

Email ThisBlogThis!Share to TwitterShare to FacebookShare to Pinterest
Labels: Signs of the Apolcalypse

Yesterday I got a text from my BFF of 19 years (19 years!!). She had heard "Semi-Charmed Life" on the radio and texted me so I could travel down memory lane with her. Just like many teenagers, music shaped my middle and high school years. Every song has a memory - whether we made fun of it, rocked out to it, or put them in our home made movies*.

So, in honor of our almost 20 year relationship I've decided to make a list of all the songs that I jam to and take me back to her and I sitting on my bedroom floor, making collages and eating M&M's and Doritoes. Oh, and if you aren't me or her ignore the comments in the parens.

"Been Caught Stealing" Jane's Addiction
"Good" Better Than Ezra (Better Than Erza)
"In the Meantime" Spacehog
"Pepper" Butthole Surfer (You're still up?)
Anything by the Beastie Boys
"Santa Monica" Everclear
"The World I Know" Collective Soul (Ed Roland is your dad)
Anything by Rancid
"Machinehead" Bush (We were thisclose to going to their concert)
"Self Esteem" The Offspring (la la  lalala la la  lalala)
"Lump" Presidents of the United States of America (PUSA)
Anything by Weezer
"Zombie" The Cranberries
"1979" Smashing Pumpkins (tuna fish)
"Spoon Man" Soundgarden
"I Alone" Live (They were from York. Rebel against having to like them!)
"Song 2" Blur (Wooo Hoooo!)
"Santeria" Sublime (I don't practice Santiago)
Anything by Nine Inch Nails
"No Rain" Blind Melon
"Mother Mother" Tracy Bonham
"Torn" Natalie Imbruglia (I luv 2 JP)
"Ball and Chain" Social Distortion
"3 am" Matchbox 20 (It's 3am I must be cute, yeah)
Anything by Green Day

I'm sure there are a million more songs to add to this list but this a good start.**

*Yes, you heard me right. Wouldn't you like to see them? Well, they're on VHS tapes. Anyone have a VCR?

Email ThisBlogThis!Share to TwitterShare to FacebookShare to Pinterest
Labels: Just for Fun

Now you might be thinking to yourself - Wow! How did you read a whole book in one day and on a weekday no less? You must be amazing!"

Well.... #1 - You're right. I am amazing. #2 - It's easy to read a whole book in one day (especially on a weekday) when you are stuck in the juror's lounge at the Hall of Justice awaiting your jury duty* fate.

When I was in middle school and passage was brought to my attention. I was moved by it. I wrote it out and hung it up in my room. It continued to inspire me for years later and it helped me to discover a passion of mine - writing. After high school I moved out and lost the passage. Twelve years have one by since then and it was recently brought to my attention again. Someone asked for good book quotes and I immediately thought of this passage. I searched the interwebs for it and after some quick goat thinking - I found it. Below is only part of the entire passage but this excerpt is the part that I had hanging on my wall.
An excerpt from Notes on the Art of Poetry by Dylan Thomas
You want to know why and how I just began to write poetry, and which poets or kinds of poetry I was first moved and influenced by.
To answer the first part of this question, I should say I wanted to write poetry in the beginning because I had fallen in love with words. The first poems I knew were nursery rhymes, and before I could read them for myself I had come to love just the words of them, the words alone. What the words stood for, symbolized, or meant was of very secondary importance. What mattered was the sound of them as I heard them for the first time on the lips of the remote and incomprehensible grown-ups who seemed, for some reason, to be living in my world. And these words were, to me, as the notes of bells, the sounds of musical instruments, the noises of wind, sea, and rain, the rattle of milk carts, the clopping of hooves on cobbles, the fingering of branches on a window pane, might be to someone, deaf from birth, who has miraculously found his hearing. I did not know what the words said, overmuch, nor what happened to Jack and Jill and the Mother Goose rest of them; I cared of the shape of sound that their names, and the words cast on my eyes. I realize that I may be, as I think back all that way, romanticizing my reactions to the simple and beautiful words of those pure poems; but that is all I can honestly remember, however much time might have falsified my memory. I fell in love - that is the only expression that I can think of - at once, and am still at the mercy of words, though sometimes now, knowing a little of their behavior very well, I think I can influence them slightly and have even learned to beat them now and then, which they appear to enjoy. I tumbled for words at once. And, when I began to read the nursery rhymes for myself, and, later, to read other verses and ballads, I knew that I had discovered the most important things, to me, that could be ever.
There they were, seemingly lifeless, made only of black and white, but out of them, out of their own being came love and terror and pity and pain and wonder and all the other vague abstractions that make our ephemeral lives dangerous, great, and bearable.
Posted by Nikki at 1:34 PM No comments:

Email ThisBlogThis!Share to TwitterShare to FacebookShare to Pinterest
Labels: Writing

We finally bought a house and it is awesome! I love my house! I just want to be in it and never leave.
The house is in a small neighborhood/suburb outside of San Diego. It has 3 bedrooms and 2 bathrooms, kitchen, living room, dining room, family room/sun room, and a 2 car garage.

One of my favorite parts (ONE of them - there are many) is the orange tree and lemon tree in the backyard. Anyone up for some fresh squeezed orange juice or lemonade? 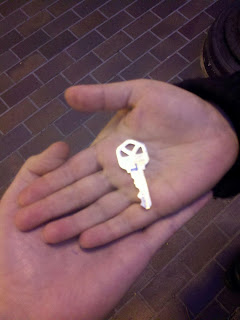 Nikki
I live in southern California, but an east coast girl at heart. This is a blog about life. My life. It won't always be about the same thing because life takes different shapes.